West Ham United Foundation Learning Academy students were given the chance of a lifetime last week, when they faced the Hammers Academy stars of the future in a friendly fixture at the Club’s Little Heath training ground.

The Learning Academy side, made up of students who benefit from elite coaching and competitive football alongside their studies, with the aim of keeping them in education, were given the opportunity having been watched by Club staff at their Chadwell Heath training base and deemed strong enough to give the Hammers Academy side a competitive fixture.

The Learning Academy programme is open to 16-18 year olds, is free of charge thanks to funding sourced by delivery partners SCL Education, and is available at five centres across east London & Essex; Basildon, Beckton, Chadwell Heath, Chelmsford and Canvey Island. 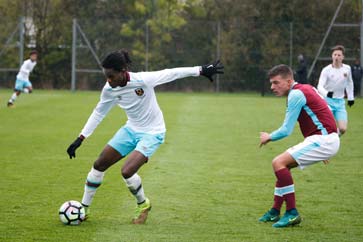 Jordan Ambrose-Richardson, who represented the WHU Foundation Learning Academy side, spoke of the differences between the sides: “They understand the game so well and they pass the ball quickly. You have to get into position quickly and be pro-active. It’s so tiring; you have to be so fit! I think I did well and I was the only player on our team to score, but they’re so hard to keep up with! We could have kept a clean sheet in the second half, but they took advantage of our mistakes.”Jordan has played football from a young age and joined the Learning Academy with WHU Foundation having previously experienced life with a Club academy. He spoke highly of the programme, which allows him to complete assignments away from the classroom in order to allow maximum time playing football: “I like that our assignments are easily accessible and all online because I can work from home as well as at college. I’d definitely recommend it to others who might have been let go from an academy.”

Whilst not strong enough to prevent an expected defeat on the day, the Learning Academy side – who have only been playing together since September – gave a strong account of themselves in difficult conditions, earning plaudits from WHU Academy staff and players alike.

Senior Academy Integration Officer Jim Hampsheir enthused: “The match was a fantastic opportunity for our players to showcase their ability, playing in a professional environment and testing themselves against one of the best academies in the country, if not the world. The players were treated like signed academy players on the day and got to experience how it would be if they did get signed by the club, having trained and played for the west ham elite second chance programme.

“The lads really tried to apply everything that we have been working on since the start of the season; they had to concentrate and work harder than ever due to the quality and movement of the West Ham United Academy players, It was a wet day which increased the speed that the ball was being played around and the tempo of the play.

“The match was a real education for our lads and showed them the standard that they will need to achieve to become a signed player.”

Jim continued: “I must praise the lads for their persistence to play the right way and show great character throughout the match; their attitude was first class.

“All of the players were buzzing afterwards and keen to get into training on Monday following their incredible experience. The 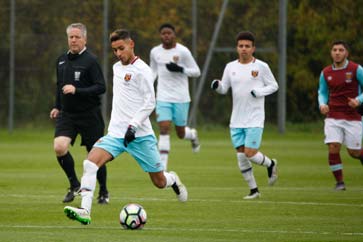 match was filmed just like any other Academy match and we will be using the footage to review and analyse individual performances to aid the football education process and development of the players.”There is a lot of potential in the squad and we do our best to help every individual to be the best they can be and, ultimately, to achieve their dreams.”

The Learning Academy programme will begin recruitment via trials for its next cohorts for all locations in early February 2017. For more details, please email Sam Taylor, staylor@westhamunited.co.uk